Here is a selection of real stories of people who have received help from the PTBI.

Mr. G. needed assistance with the purchase of an electric wheelchair. He had suffered spinal injuries following an accident at work and was no longer able to work as a lorry driver for a local cheese plant.  The PTBI helped with the chair purchase and various Council issues which gave Mr. G. a certain amount of independence.   Mr. G.’s wife was his carer and he had two school-aged children and found it difficult to manage on his disability benefits. Our Trustees decided to make him a beneficiary and he started receiving quarterly payments plus a summer and winter bonus.
Later when Mr. G. received Industrial Injury Compensation and his wife was able to go out to work, he was no longer eligible for regular payments from the PTBI, but he has subsequently been awarded a one-off payment to help with cost of replacing the gearbox in his car.

When Mr. O. was admitted to hospital after suffering a stroke, we were asked to provide some funding to cover the cost of taxi fares for his elderly wife who had very bad arthritis and was unable to use public transport to visit him.  The PTBI made a contribution and when Mr. O. was discharged our Welfare Visitor assessed their situation. The couple had a modest income and were having to pay for help in the flat and also continued to need using taxis for shopping trips. The Trustees agreed to award quarterly payments plus a summer and winter bonus.  These payments continued until Mr. O. died and his widow then became a beneficiary, which enabled her to continue living in their flat and pay for the help she needed.

Mr. D. aged 38 was referred to the PTBI by Leicester Charity Link for help with the purchase of a washing machine and a fridge freezer. He had been forced to give up work at an egg packing factory because of failing eyesight and was subsequently registered blind. He was trying to manage on Incapacity benefit and lower rate DLA. The PTBI made a donation of £525 to cover the cost of the appliances.
A welfare visit revealed that Mr. D. was living in a small 1 bed-roomed flat in very cramped conditions and was very depressed. In addition to everyday expenses he was paying child support money to the mother of his 7 year old son. Finances were very difficult. He was desperately in need of a holiday, so the PTBI agreed to pay 50% of a week’s holiday to be organised by the Leicester Charity.
The PTBI Welfare Visitor wrote to the local council and the housing association in support of Mr. D’s application to be moved into a 2 bed-room property, so that his son could stay at weekends. He was eventually re-housed and we helped with the cost of new carpets.  The PTBI have also helped with payment of T.V. licence and phone bills.
Mr. D. now receives summer and winter payments, which enables him to buy birthday and Christmas presents for his son and to have an annual holiday.

Mrs. T. is a lady in her nineties who worked for a local bacon curing and trading company for many years and in 2010 she became a regular beneficiary of the PTBI. She lives in sheltered accommodation and pays to have fortnightly frozen meals delivered. Reading has always been one of her pleasures, but sadly in 2011 her eyesight deteriorated suddenly due to AMD.  Mrs. T. has been visited by one our trustees and we are keeping in touch to see if there is any other help she needs.

When Mrs. G. retired from the food trade she and her son bought a house in a small rural village. She took out a loan to have essential alterations done and was also supporting her son with his finances as he was finding it difficult to get regular work. Because she only had a modest pension she was finding it difficult to cope with mortgage and loan repayments. Mrs. G. had had operations on her feet which meant she required special shoes which are very expensive and because of the area in which she lived, needed a car to go shopping and to visit her local G.P. surgery. Our Trustees made her a regular beneficiary, thus enabling her to live more comfortably and with less anxiety.

Mrs. L. was referred to us by SSAFA requesting help to pay mortgage arrears. She had been made redundant from her job as a supervisor in a local provisions company and was also caring for a seriously ill husband. She was visited by one of our Trustees and our Welfare Visitor who assessed her situation. Before her redundancy, Mrs L. had borrowed money to purchase an electrically powered scooter for her husband plus money for essential repairs to the house, but she now found herself with huge debts and a much reduced income and was unable to keep up with repayments. PTBI paid £500 towards mortgage arrears and later a further £500 towards the purchase of a car which was essential for her work as a Carer. Sadly, soon afterwards her husband died and she had to sell the house and move into rented accommodation in order to pay off her debts. At this stage it was agreed to make Mrs. L a regular beneficiary.  The money she receives from the PTBI together with her pension means she has now been able to give up work and begin to live a more normal life and spend more time with her grandchildren. 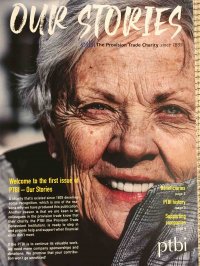 Our new PTBI Newsletter is now available by email or in hard copy.

Our welfare visitor contacts potential beneficiaries and visits where appropriate to discuss their health and social needs and their eligibility for help from the PTBI. On-going support is offered by telephone, e-mail and home visits.

NB - During the current Covid-19 situation, please contact us by email: secretary@ptbi.org.uk